your daily dose of skindred news 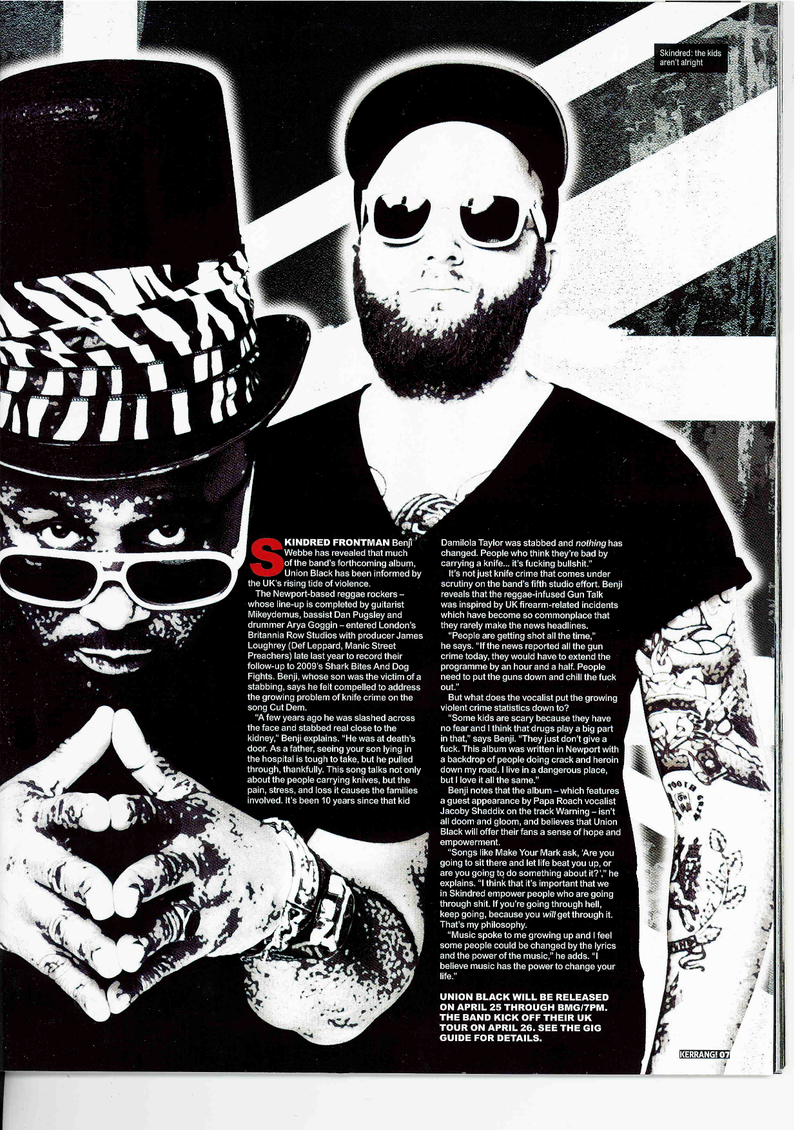 Thanks to Shari and Kim! It says: Skindred frontman Benji Webbe has revealed that much of the band's forthcoming album, Union Black, has been informed by the UK's rising tide of violence. The Newport-based reggae rockers - whose line-up is completed by guitarist Mikeydemus, bassist Dan Pugsley and drummer Arya Goggin - entered London's Britannia Row Studios with producer James Loughrey (Def Leppard, Manic Street Preachers) late last year to record their follow-up to 2009's Shark Bites And Dog Fights. Benji, whose son was the victim of a stabbing, says he felt compelled to address the growing problem of knife crime on the song Cut Dem. "A few years ago he was slashed across the face and stabbed real close to the kidney," Benji explains. "He was at death's door. As a father, seeing your son lying in the hospital is tough to take, but he pulled through, thankfully. This song talks not only about the people carrying knives, but the pain, stress, and loss it causes the families involved. It's been 10 years since that kid Damilola Taylor was stabbed and nothing has changed. People who think they're bad by carrying a knife, it's fucking bullshit." It's not just knife crime that comes under scrutiny on the band's fifth studio effort. Benji reveals that the reggae-infused Gun Talk was inspired by UK firearm-related incidents which have become so commonplace that they rarely make the news headlines. "People are getting shot all the time," he says. "If the news reported all the gun crime today, they would have to extend the programme be an hour and a half. People need to put the guns down and chill the fuck out." But what does the vocalist put the growing violent crime statistics down to? "Some kids are scary because they have no fear and I think that drugs play a big part in that," says Benji. "They just don't give a fuck. This album was written in Newport with a backdrop of people doing crack and heroin down my road. I live in a dangerous place, but I love it all the same." Benji notes that the album - which features a guest appearance by Papa Roach vocalist Jacoby Shaddix on the track Warning - isn't all doom and gloom, and believes that Union Black will offer their fans a sense of hope and empowerment. "Songs like Make Your Mark ask, 'Are you going to sit there and let life beat you up, or are you going to do something about it?'," he explains. "I think that it's important that we in Skindred empower people who are going through shit. If you're going through hell, keep going, because you will get through it. That's my philosophy." "Music spoke to me growing up and I feel some people could be changed by the lyrics and the power of music," he adds. "I believe music has the power to change your life." UNION BLACK WILL BE RELEASED ON APRIL 25TH THROUGH BMG/7PM. THE BAND KICK OF THEIR UK TOUR ON APRIL 26TH. SEE THE GIG GUIDE FOR DETAILS.

Oops, you forgot something.

The words you entered did not match the given text. Please try again.